It’s easy to see why.

For nearly 70 years the professional summer stock theater, located in the heart of Caledonia State Park in Franklin County, has earned a reputation as one of the most well-regarded summer theaters in the United States. This season should be no different, even as the staff, impacted by continued uncertainty, preps a non-traditional slate of events, including a film series and live music.

“They were called that [by The Times] because of their consistent quality,” says David Hemsley Caldwell, Totem Pole’s artistic director. “It was also a lovely place to work in the summers and to get outside of New York City.”

That high standard began in 1953, the theater’s third year, when William Putch became artistic director. He ran the playhouse for 30 years until his sudden death in November of 1983 at the age of 60. Putch directed over 300 productions, many starring his wife, Emmy Award-winning actress Jean Stapleton from the classic TV show, All in the Family. It was during Putch’s tenure that the playhouse rose to national prominence.

“It was his vision, his enthusiasm and his excitement for theater that built this place,” says Caldwell. “I look back at the old brochures and he used to do like 12 shows in 12 weeks. He was amazing, and it was his energy that made this place take off.”

Being married to a professional actress with an impressive resume helped elevate the theater’s standing among Actors’ Equity Association members. Stapleton’s influence would land a litany of major stars over the years, including Keir Dullea, who starred in 2001: a Space Odyssey and its sequel, 2010: The Year We Make Contact, John Ritter of the smash ‘70s television sitcom Three’s Company, Sandy Dennis, who won an Academy Awards for Best Supporting Actress in Who’s Afraid of Virginia Woolf?, Sada Thompson of the TV show Family, and Curtis Armstrong of Moonlighting fame and the Revenge of the Nerds film series.

“So there’s been a lot of successful people, but there’s also been quite a few quietly successful people that have come here and made this such a wonderful place to work,” says Caldwell, who has acted, directed and served as musical director at Totem Pole for the past 23 years.

After Putch’s untimely death, his daughter Pam took over theater operations for a year along with Carl Schurr and Wil Love, two beloved actors who had performed in many Playhouse productions.

“[Carl and Wil] had a history with Mr. Putch, so the standards and the quality continued because they had worked for him,” adds Caldwell. “They were able to continue his legacy for another 25 years.”

Located 15 miles west of Gettysburg just off Route 30, Totem Pole Playhouse is a theatrical oasis surrounded by natural beauty. Large pine trees, many twice as old as the theater, fill the air with their scent and the trees that border the theater offer a respite from the blazing heat in summer.

There’s something magical about the theater that brings patrons back year after year.

“It is a beautiful theater in a beautiful setting in a beautiful park,” says Caldwell. “Carl Schurr used to call this ‘The Enchanted Forest.’ You pull up to see a show and the grounds are beautifully landscaped and beautifully decorated with lights. It’s really a hidden gem. Hopefully we can make it become a little less hidden.”

Totem Pole Playhouse’s 70th season, which should have been celebrated in 2020, was postponed due to COVID-19 restrictions. Given the continued uncertainty going into 2021 — and the fact that play contracts must be secured well in advance of when they will be performed — playhouse officials could not secure a normal schedule of live productions for this season.

Instead, they decided to explore some new territory during what Caldwell is calling the playhouse’s 69½th season.

There is a plan to do the Broadway musical I Do! I Do! either virtually or, preferably, in the theater this September. Given how quickly CDC guidelines have changed in recent weeks, Caldwell and company hope for an opportunity to perform the show in-house before live audiences.

“I believe people are tired of virtual productions and they want a sense of normalcy back in their lives, so it is our goal to remedy that by doing a live production,” says Caldwell. “But whether the play is virtual or live, we are just not sure yet. We are going to produce it one way or the other, and while we were originally going to air it virtually in July, we do know that it won’t be happening that month.”

Caldwell encouraged theater lovers to keep an eye on the playhouse’s website and social media channels for further details about I Do! I Do!

Other events on the 2021 calendar include three musical performances, the showing of the Route 30 film series, an Oktoberfest celebration, and revival of a Totem Pole tradition that began in the 1980s: live performances of A Christmas Carol. The music and films are slated for weekends June through August, and are taking place outdoors.

“This is a new exploration for us but we hope to expose the theater experience to new audiences and that those individuals will want to return in 2022 when we hope to be back to our usual full schedule of plays and musicals inside the theater,” says Caldwell. “We hope this gains us new patrons.”

The Route 30 trilogy will be shown on a large projection screen on the 30th of each month, beginning in June and running through August. Produced by John Putch, Bill’s son, the film series is a postcard to the local area based on family stories passed down through the years. John and sister Pam have acted in more than 30 productions each on Totem Pole’s stage, beginning when they were children. 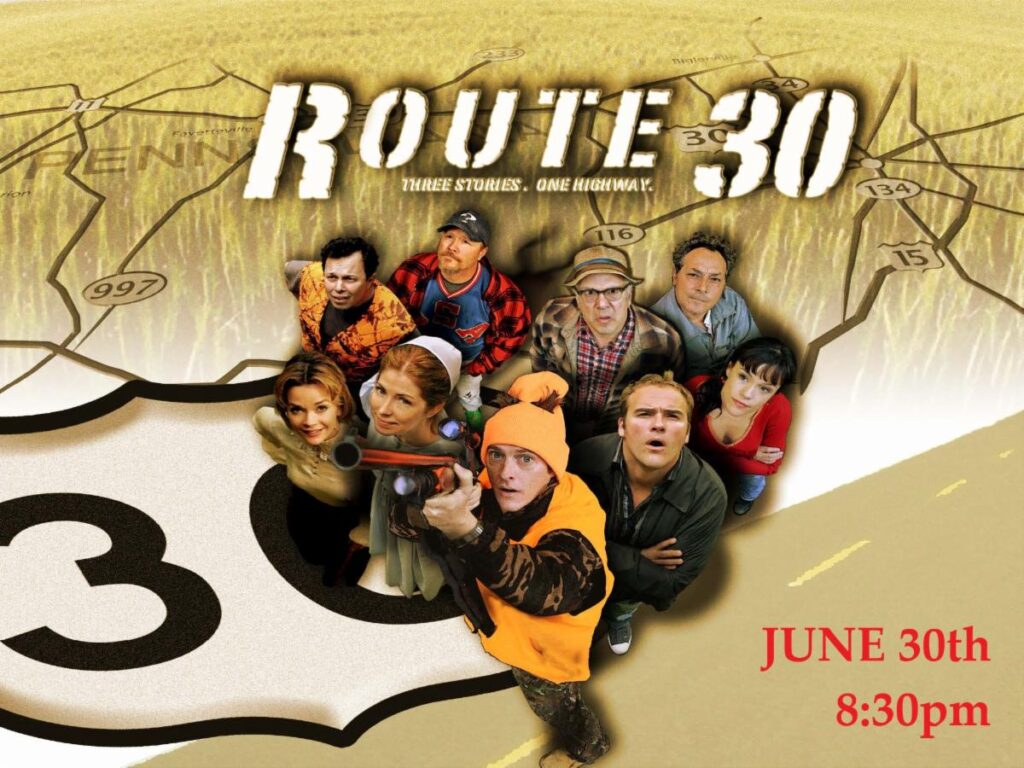 In his films, John went with what he knew worked: All of the actors in the movies have either performed alongside him at Totem Pole or have acted in other shows at the theater.

“Some of the greatest acting I’ve ever seen in my life has been on that stage, so why wouldn’t I feature Wil and Carl and all of the others who have acted at Totem Pole?” he says. “Not only are they some of the very best actors [in the business] but they also happen to be my friends.”

John always carried around a camera as a young boy, shooting home movies. That love of being behind the camera carried into adulthood, when he knew he wanted to shoot a full-length film. He couldn’t think of a better area than the magical theater in the woods as his location.

“I knew I wanted to make a warm, fuzzy and humorous movie, and I really didn’t like Los Angeles for the setting,” he explains. “I’ve always been connected to PA, even after I moved away, and I always thought it would be a great location to shoot a film. I also loved some of the stories that have been in our family lore all of these years and those stories could only have been told there.”

One might call the films a love letter to the area — they feature Caledonia, Chambersburg, Gettysburg, and, of course, Totem Pole.

“I was always fascinated with the Jennie Wade story from Gettysburg and there’s Mr. Ed, who was a great friend to the theater and who owned this unusual store right up the street from the theater,” says John. “These are all things that just exist — that no one would ever expect existed — and I wanted to tell those stories.”

Along with a number of the actors who appear in the films, John will attend two of the events; an audience Q&A will be held after each showing.

The live music shows will cover a variety of genres. Country music is in the spotlight in June, and the performances will feature CoCo Sansoni; in July, popular singers and songwriters spanning five decades will be performed by Robbie Limon; and the music of Buddy Holly as performed by Todd Meredith and The Rave-Ons is on the docket in August.

“We have three different types of musical acts because we want it to be varied,” says Caldwell. “The First Ladies of Country show in June will be our first live performance in 1.5 years.”

Both Limon and Sansoni are no strangers to the Totem Pole stage. Sansoni was featured in Always…Patsy Cline in 2007 and Limon was the lead performer in Hank Williams: Lost Highway in 2011.

Oktoberfest in September will feature German food and beverages, German music and dancing, bringing to an end a summer unlike any other at Totem Pole.

As far as future productions at Totem Pole Playhouse are concerned, Caldwell hopes that live theater operations begin with I Do! I Do! and then continue with 10 live performances of A Christmas Carol over eight days in December at the beautiful Majestic Theater in Gettysburg.

He also hopes the theater will be able to celebrate its 70th season in 2022 with three shows that have already been booked: Always…Patsy Cline, Beehive and The Sound of Music.

“We have no way to know what the future will bring but we are optimistic that theater patrons want to come back,” says Caldwell. “We’ve received a lot of support from our patrons (who have transferred their tickets to 2022), our advertisers and the community over the past year, and for that, we are grateful.”

JAMES MENTZER is president of Mentzer Communications LLC and a freelance writer who is the author of three books, including Pennsylvania Manufacturing: Alive and Well.  He resides in Harrisburg.
Share