“I think we can do a winery,” Nicholas Ducos recalls telling Francesca Galarus, “if we went back home to where we’re originally from.”

That conversation took place after the pair met while working in the Miami hospitality industry. Fast-forward to 2021: Ducos and Galarus recently opened Mural City Cellars in Philadelphia’s East Kensington neighborhood, and are putting down roots.

“Nicholas and I are life partners and business partners,” says Galarus. She’s a Drexel alum from Philadelphia with years of experience in the local restaurant scene; Ducos is a New York native. When they first met, he was running beverage programs as a sommelier at a Miami wine bar, and beginning to pursue winemaking.

“We both loved the industry, but we were looking for something different,” she adds.

Ducos’ next job took him to California, where he made white wine at a small Napa winery, and then to New Zealand, for a similar dive into reds. He continued his education with a three-year stint at a New Jersey winery, connecting with regional growers and learning the intricacies of the local climate.

The two moved to Philadelphia in 2017, and began to look in earnest for a space in 2019. The search centered on their home neighborhood of East Kensington.

“I wanted to be in a big city that feels like a small town,” says Galarus, touting Philly’s “approachability and affordability,” and the friendliness and engagement of their neighbors. “We wanted to be a part of this community, not just as residents, but as business owners.”

According to her, Philly is a great audience for an urban winery.

“People are really open,” she says. “They have really experimental palates, and I think that’s so cool. It’s a town that’s very receptive to people who are trying something.”

The founders leased a production and retail space two blocks from their home in November 2020, and opened on January 30, 2021.

Mural City uses only sustainably grown fruit from small vineyards within a 300-mile radius of Philadelphia, focusing on hybrids and varietals that thrive on the East Coast. That means choosing grapes like Cabernet Franc and Chambourcin over, say, Cabernet Sauvignon.

“Things that show good color, good structure, good fruit components, and what’s typically being done in sweet styles on the East Coast, we do them in dry styles,” explains Ducos.

“We don’t add anything to enhance the color or alcohol,” adds Galarus — no pre-fermentation additives to increase alcohol, or post-fermentation tweaks to boost sweetness. “It’s important to us to showcase what grapes, especially hybrids, can produce.”

The winery aims to produce a new slate of wines every year, with labels designed by a rotating roster of local artists. 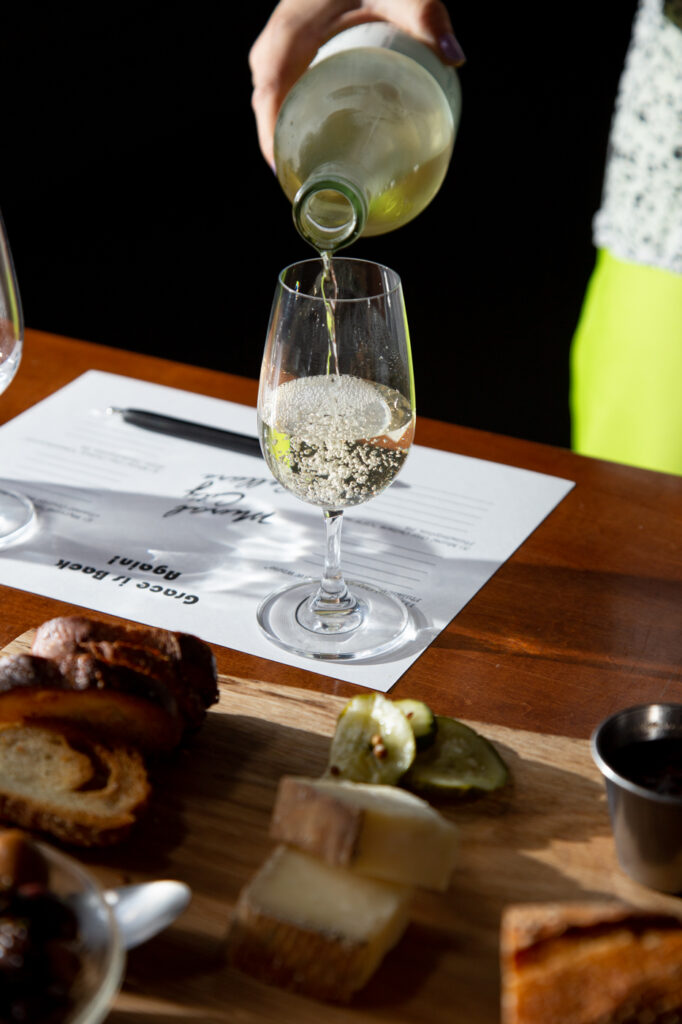 Things are busy for the couple, who are still working other jobs while they get Mural City off the ground. Their Amber Street space initially opened for retail only on Friday nights from 4-10 p.m., but they recently added bar and glass service. Now small groups can book private weekend tours and tastings with the founders, who note that both their Friday bar service and tours always showcase a wine from another local maker.

Galarus and Ducos are also finding success with their CSW program — that stands for “community supported winery,” in the model of a CSA. Mural City CSW members pay up front for the year to receive two bottles of wine per month and 10 percent off all additional purchases. Fifteen percent of each membership fee is donated back to the community: This year, the founders are splitting those dollars between the East Kensington Neighbors Association (EKNA) and the Mural Arts Project.

Since launching the program in January, they’ve donated almost $3,000 to EKNA, which immediately turned the funds into micro-grants supporting new gear for community gardens and parks. Right now, they’re maxed out at 50 CSW members, but are planning to quadruple number that next year.

“We want to make sure people know that we are the first urban winery in the city,” says Ducos. “But we’re not going to be the last.”