Along for the Ride: An ambitious plan lifts a Johnstown institution to the top

After the infamous 1889 flood nearly washed away the city, construction on the Johnstown Inclined Plane began. Since its completion in 1891, the funicular railway has twice carried Johnstown residents to safety when the waters rose. Now this iconic piece of Pennsylvania infrastructure is at the heart of a massive, multifaceted upgrade that local leaders hope will boost the region.

The Cambria County Transit Authority (CamTran) currently operates the Inclined Plane, which serves tourists, bikers, and commuters heading up and down the steep side of Yoder Hill between Johnstown and neighboring Westmont. 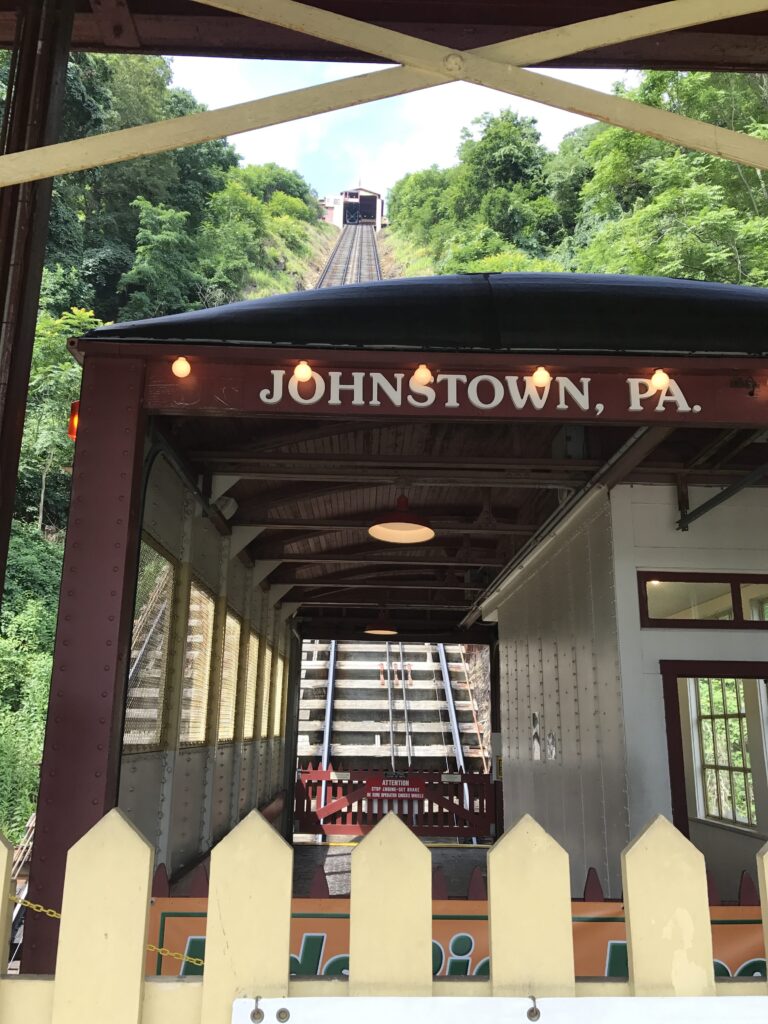 “The Eiffel Tower is to Paris what the Inclined is to our region,” says CamTran Executive Director Rose Lucey-Noll. Her organization is an active partner in federal, state, city, and local volunteer efforts to transform the area over the next few years.

“There’s a huge buzz about that hillside,” she adds.

The Community Foundation for the Alleghenies (CFA), a core leader of the current Inclined Plane hillside project, calls the proposals “a linchpin for the region’s future.” Plans include mountain bike trails, expanded and newly connected walking trails, a 90-acre Inclined Plane Riverside Park across the hillside opposite downtown Johnstown, a brand-new, ADA-compliant river access point called Sliver Park, and rehabilitation of the Inclined Plane railway itself.

Lucey-Noll estimates the ambitious project will keep the Inclined Plane closed until spring 2023, but it will be time well-spent, keeping this National Historic Landmark vital for years to come.

Johnstown lies about 70 miles east of Pittsburgh, where the Little Conemaugh and Stonycreek Rivers converge into the Conemaugh River. Since its founding in 1800, Johnstown has been prone to floods from mountain snowmelt and rainfall. The one that looms largest happened in 1889, when a huge rainstorm led to a catastrophic failure of the South Fork Dam, 14 miles upriver. The waters of Lake Conemaugh swept through the valley’s towns with the force of Niagara Falls, killing more than 2,000 people.

The Inclined Plane was completed about three years later and became an important connector between Johnstown and the surrounding towns. A funicular railway travels a steep grade, with one station above and one below. Two cars operate on the same giant cable, counterbalancing each other, one rising while the other descends.

The Johnstown Inclined Plane is nearly 900 feet long and travels a 71.9 percent grade that ascends more than 500 feet in 90 seconds. Its two cars can carry about 65 people each. In 1936 and again in 1977, it carried flood evacuees up and rescue equipment down. Its last major rehab was in 1983 when a visitor center was added at the top. Today, most of the riders are sightseers, but the railway remains an important transit connector for local commuters and is a much-loved part of area holiday traditions.

With funding from CFA, PennDOT, the Federal Transit Administration, the National Park Service, and other agencies and organizations, the current work will include everything from replacing rail ties and rehabbing the cars’ undercarriage and suspension, to electrical and mechanical upgrades, new paint and roofing, and a new emergency generator.

According to Lucey-Nolls, original pieces of equipment must be re-engineered, which means it won’t be a quick job.

But infrastructure is only part of the update. CamTran launched a new partnership with local volunteers to add a significant amenity to the hillside: mountain bike trails. Before the current closure, CamTran began offering a special day pass for bikers.

It was “a very organic relationship, because once they go down the hill on their bikes, they need a quick way to go back up,” explains Lucey-Noll. For $15, bikers get a wristband and the freedom to “go to their heart’s content all day.”

“So far as we can tell, we’re the only trail system in the U.S. that uses public transportation in the form of a shuttle on an inclined plane,” says Vision Together 2025 volunteer Michael Cook, who’s also a board member at the Conemaugh Valley Conservancy (another important project partner), and has been spearheading work on the new trails.

In addition to sprucing up multi-use trails that have criss-crossed the hillside since the 1970s, partner organizations have added seven miles of single-track downhill cycling trails (already certified by the International Mountain Biking Association).

On any given weekend, the new trails attract up to 30 riders from out of town, in addition to local thrill-seekers. That spike in traffic has already benefited the Inclined Plane, which saw increased sales at its gift shop and partnered with a local Johnstown business to add biking gear to the inventory. Everyone looks forward to the resumption of the day pass when the railway reopens.

Cook admits that, when he first moved to Johnstown, he couldn’t find enough to do. But then he discovered kayaking and began exploring the area’s world-class outdoor adventure offerings: “I really fell in love with the area then.”

One day, a friend — and avid biker — asked Cook why there weren’t any bike trails on the Inclined Plane hillside. That conversation sparked a proposal, eventually adopted by the city with support from Vision Together 2025, which coordinated volunteers and provided a microgrant for hand tools.

In spring 2018, after volunteers had already completed two trails and celebrated a grand opening, Cook got surprise proof of just how invested locals were in the new amenity. After a year of work, “some freak of nature tornado just happened to land right on [a] trail.” The hillside, which boasts new growth forest that rebounded from 19th-century industrial logging, is vulnerable to storms that uproot its trees.

Cook expected to repair the trail with a group of four other volunteers, but the turnout was much larger.

“Every little walk of life from Johnstown helped us clean those trails out, and they finished in about two weeks,” he says. It showed how supportive everyone was of the project, whether or not they were avid riders.

“That’s part of the connection people have in Johnstown,” says Conemaugh Valley Conservancy Project Manager Brad Clemenson. “They see something, they want to get it done, they come together and do it. Now they have another asset that they can enjoy.”

Walkers and bikers seeking a more level surface have a lot to look forward to, as well. The hillside plans include improvements to a large network of local trails, including connections that will link Johnstown’s Path of the Flood and Jim Mayer Riverswalk Trails — each part of the September 11 National Memorial Trail — with new and newly accessible hillside trails.

Another project is the Coconut Place Trailhead in the city’s Kernville neighborhood, downstream from the Incline. It will add parking and easy access to trails on the interior hillside.

Clemenson calls it a “very nice cluster of activity that will make it more attractive for people to live downtown,” creating “a new identity that will reshape and rebuild our local economy.”

“We need to get all of those projects to gel into one cohesive trail idea for the city, and start marketing them all together,” adds Cook.

The Inclined Plane Riverside Park will eventually boast a zipline and recreation center, a great amenity for families like those attending the annual All American Amateur Baseball Association summer tournament. The CFA hopes to release an RFP for a private developer later this year.

Another piece of the new park will give Johnstown residents and visitors something they don’t have today: direct access to Stonycreek River. Sliver Park @ The Inclined Plane will include a dock where park-goers can fish or put a boat in the water, connected to the Inclined Plane complex with a paved, ADA-compliant walkway accessible to wheelchair users, bikers, kayakers, young families and Johnstown’s many elderly residents.

“In the city itself, there are very few natural stream banks,” says CFA president Mike Kane, who predicts that Sliver Park’s visibility from downtown will spur high interest in the new amenity. “The accessibility issue is significant.”

The new park and walkway will provide a seamless connection from the bridge (spanning the Stonycreek River between the Inclined Plane and downtown Johnstown), to the railway, wooded hillside trails, and the river. If they had created the new amenity without that accessibility, Kane says, “we would not have done our whole job.”

Kane also points to ongoing remediation efforts of what locals call the “Inclined Discharge,” a small but noticeable drainage from an abandoned mine at the base of the Inclined Plane. A $231,000 grant from the PA Department of Environmental Protection will support a remediation study by the Cambria County Redevelopment Authority (CCRA).

“To be able to clean that up is critical from an economic and environmental perspective,” says CCRA Executive Director Renee Daly.

Regional river cleanup has been ongoing for many years. According to the CFA, “Remediation of the Inclined Discharge represents the final major milestone to having pristine waters within the stream corridor.”

“Every element on that hillside — the trails, the park, the accessibility enhancements, the Plane itself — everything sort of came together when we realized we ought to think about it in totality,” says Kane. “I think in a lot of Pennsylvania’s older, smaller cities, people learn to settle for what was there. It’s because in a lot of cases, we just don’t give ourselves enough credit.”