A historic mill is reborn in Altoona

A former silk mill that opened in 1889 is continuing its role as a Blair County jobs generator. The Mill at Altoona is a 100,000-square-foot mixed-use commercial space that local leaders hope will draw new businesses to the region, as well as give a boost to existing ones — and it’s ready for tenants.

“Really, it’s a living-history environment when you’re in it,” says Stephen McKnight, president and CEO of the Altoona Blair County Development Corporation (ABCD), the Mill’s marketing partner, of the meticulous restoration that left many original details of the structure intact.

“It’s been a great reuse of the building materials,” adds John Radionoff, president of complex owner Silk Mills Properties, Inc. He has been involved with the rehab from the very beginning, steering the design of the layout and exterior via extensive research into the site’s history, as well as study of existing architecture in Pittsburgh and New York City.

The original silk mill, financed by a New Jersey-based company and a public bond issued by Altoona residents, launched in 1889. It closed after two years, but city bond-holders then leased the property to a Swiss silks manufacturer. That company expanded the mill’s original footprint with an annex across the street that grew to four floors — connected to the original building by a passage over 25th Street — and a state-of-the-art boiler plant on 9th Street that powered the mill’s machines.

A 1901 engineering article about the new power plant notes that, at the time, the factory boasted 40,000 spindles and 600 looms. The Swiss company ran the site until 1932. After its closure, the complex was repurposed by a pair of U.S. clothing manufacturers that operated there for decades. In the 1990s, some of the buildings were demolished, and the remaining ones repurposed again as an office park.

Today, the restored site includes the original 1889 structure as well as the turn-of-the-century annex, though the walkway was removed in the 1990s. The power plant is gone, but its smokestack remains as a “symbol of the building’s history and economic resiliency,” Radionoff writes in an introduction to the space.

The renovation removed the steel lintels that blocked the arches of the original building’s windows, every one of which were reutilized in the new design. The plans also ensured that the mechanical elements didn’t block the view.

“I told the contractors to think of this place as a warship or a luxury liner,” explains Radionoff of placing all the piping in the center of the building.

Construction was delayed for several months when the abatement of the building’s ubiquitous lead paint turned out to be a bigger job than anticipated. Done with the help of an environmental consulting firm, the removal had to be completed without water because of the building’s wooden structure.

“Every square inch had lead paint,” says Radionoff. “When you go in today, you can’t find a drop of paint. It came out magnificent.”

When contractors ask him where he bought all the wood, he replies, “It’s original.”

The revamped complex is the result of a major partnership between the City of Altoona, ABCD, the Pennsylvania Department of Community and Economic Development (DCED), and the private sector. The building needed $4 million worth of environmental assessment and mitigation before the renovations began. More than $6 million in DCED financing helped launch the rehab. The City of Altoona tackled the surrounding grounds, with public-space improvements such as sidewalks and landscaping.

Radionoff lauds DCED for its creativity, stepping beyond the projects it usually targets with its Business in Our Sites program. Typically, he says, the initiative assists development on large open areas that need basic infrastructure like stormwater management, utilities, roads, sidewalks, and lighting, to create “pad-ready” sites for businesses to land and build.

“It was clever of them to realize, why are we taking up this beautiful land when we have all these blighted mill structures in Pennsylvania?…Why can’t we apply the same financing to rejuvenate these structures?” explains Radionoff. The Mill’s DCED funding allowed the partners to fund elevators, parking lots, and stairways as if they were the external infrastructure that the program typically supports. 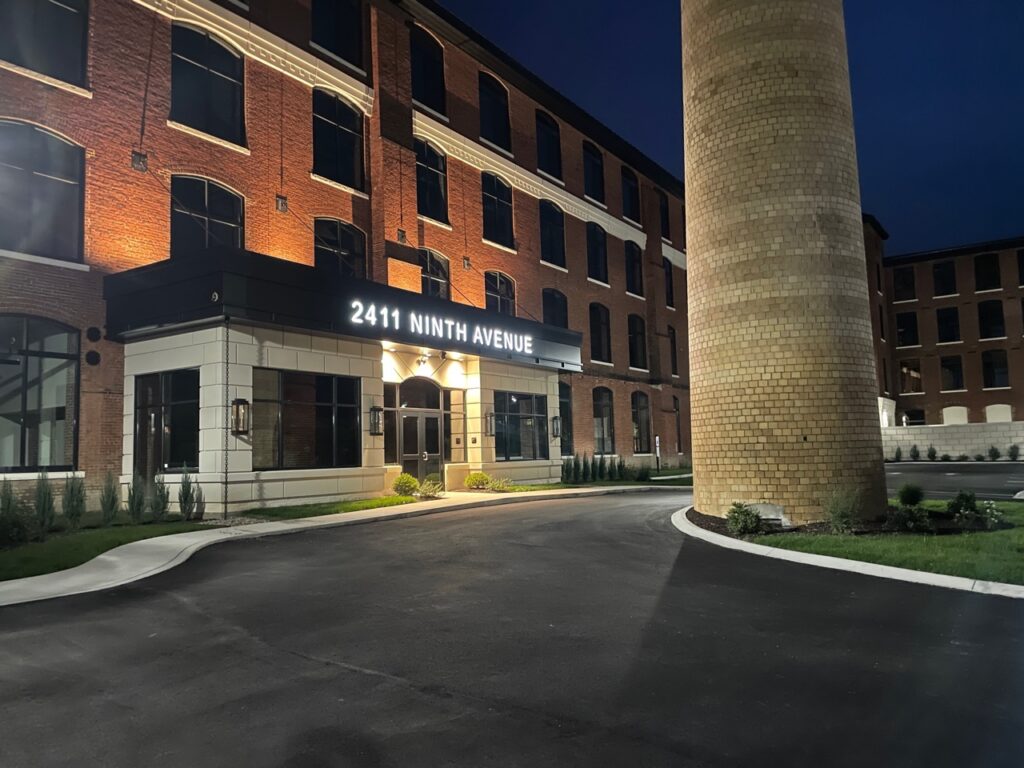 The partners hope the new mixed-use facility, which includes potential office and coworking space, room for a restaurant or café, and fourth-floor units they hope to develop into luxury apartments, will attract a mix of new and local businesses.

“We’ve often been overlooked for a lot of businesses’ relocation needs, especially within the tech space,” says McKnight — he hopes the Mill changes that.

“We saw an opportunity to create something that I don’t think exists elsewhere in Blair County,” adds Radionoff, pointing to the Mill’s dual-sourced high-speed fiber networks arriving via two separate conduits into the building. The partners hope this will help attract tenants who wouldn’t have landed in Altoona before.

Other possible targets include local businesses who want to open a new training facility or HR hub, or trucking and manufacturing firms who often struggle to recruit college-educated office workers to more rural job sites. An office at the centrally located Mill could help attract and retain new talent. The partners indicate growing interest since the building’s public debut at the end of August, and predict more news in the coming weeks.

“The full court press is now on to welcome new tenants,” says McKnight.